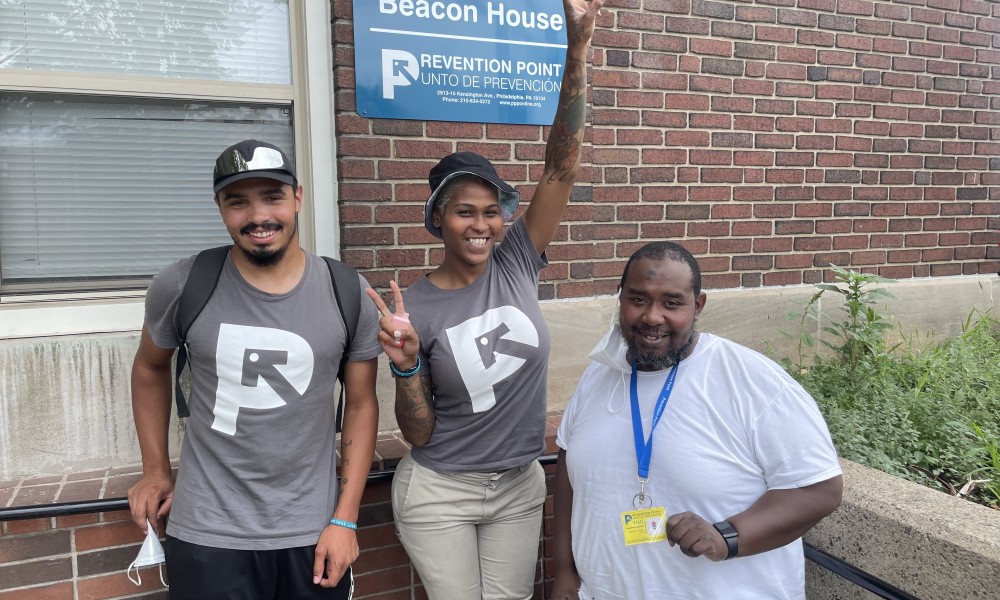 We are meeting what was previously an un-met need, providing specifically-tailored shelter services to people who are using drugs in Kensington and who, because of that, are either scared or unable to leave the neighborhood.

Before the month of July comes to an end, Prevention Point Philadelphia (PPP) wants to acknowledge the one-year anniversary of our housing program’s move to Beacon House, a new shelter on Episcopal Hospital's campus in the heart of Kensington. Beacon House has indeed lived up to its name, having become a symbol of hope and progress for staff and participants alike.

PPP’s housing program is designed around the “housing first” approach to services. Kate Perch, who just transitioned from Director of Homeless Services to the new Chief Operating Officer, has been working with PPP for nearly 10 years, and has played a crucial role in the housing program since its inception.

“There is capital "H-F Housing First” which is a model that was developed out of New York that is specifically about taking people directly from the streets and putting them in permanent housing... But there’s also a more philosophical lower-case “housing first” that is about breaking down the barriers of getting people into care and housing in whatever way that might look like,” Kate explains.

"How can you still be a good tenant even if you’re using? Those are the kinds of discussions we’re having."

“We are meeting what was previously an un-met need, providing specifically-tailored shelter services to people who are using drugs in Kensington and who, because of that, are either scared or unable to leave the neighborhood,” she says.

According to Kate and her team, PPP’s model is grounded in trying to give people as much access to services and other opportunities as possible. They analyze the reasons why some of our residents have not been able to succeed in other shelter or housing programs, and make adjustments accordingly to PPP’s services.

Both Kate and Housing Case Manager David Maldonado referenced curfews as a common barrier that participants face at other shelters.

“There is no curfew at Beacon House,” David remarks. "Residents can go in and out as they please. I think this is the only shelter in the city that doesn’t have a curfew. That’s part of why so many people want to come here!”

PPP staff also do not pat people down when they enter the shelter, and are not considering zero-tolerance or three-strike policies around things like substance use. PPP wants residents to feel that Beacon House is their home, and that their privacy and autonomy is respected and valued.

“Our case management program recognizes that some people are going to choose to keep using, and so conversations around housing and other care are going to be focused on that,” Kate says. “Having really frank conversations with people around what their housing options are going to be if they continue using, and what some of the risks are that they might need to be aware of. How can you still be a good tenant even if you’re using? Those are the kinds of discussions we’re having.”

Taylor O-Day, shelter support staff, has been working in the housing program for three years. In her role, she is constantly interacting with residents, monitoring restrooms for medical emergencies, and monitoring who is let in and out of the building. While PPP has always had a high ratio of staff to residents compared to Philadelphia shelter standards, Taylor says that Beacon House has been a welcome improvement.

“I feel more secure at Beacon, we have better systems,” Taylor says. “I feel as though we have more support and we can work alongside case managers. There is more communication now between our staff.”

Taylor also mentions that housing everyone in the same building saves staff and residents a lot of time and stress.

"The move to Beacon has helped with small issues that would be bigger if we were in two different shelters. Now that we’re in one building, we don’t have to go searching for people since we already know where they are.”

As a case manager, David appreciates having his own office where he can have what are often very sensitive conversations with participants about health, harm reduction, legal history, and substance use.

“Now we have privacy. The participants talk to us and open up, they cry here. Everything. This is a better atmosphere. I really enjoy working here. I really do,” he says.

In a city where 5,700 are considered “homeless” and 950 people are completely unsheltered, Prevention Point Housing is doing everything we can to offer our residents comfort and stability, and connect them to permanent housing situations that work for each individual.

“I believe that the work we’re doing is amazing. I love that we help everyone. I love that they have a home here, even if it’s not a permanent home,” Taylor emphasizes. “I really appreciate the fact that we have a new building where they’re comfortable and they all have their own space... I’m proud of being a part of the team. Being a part of change.”