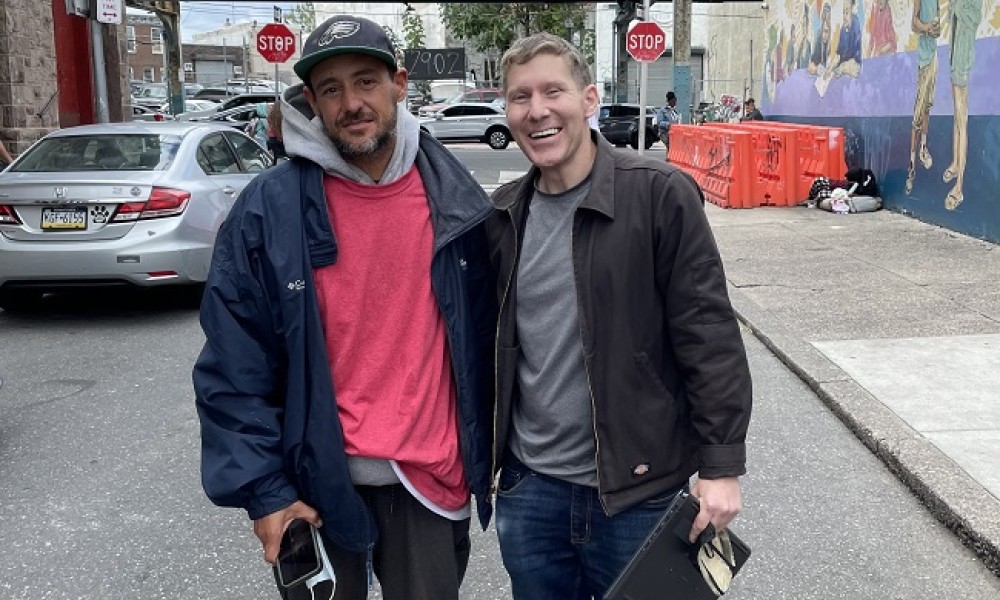 Sublocade is like a miracle drug. It doesn’t interfere with eating or sleeping, it doesn’t make you high. I’ve told so many people about it.

This National Recovery Month, we are highlighting PPP’s Medication for Opioid Use Disorder (MOUD) clinic, and particularly the medication Sublocade, which has proven immensely successful for many of our patients suffering from opioid use disorder (OUD). Read on to find out about the clinic, MOUD (known as the “gold standard” of OUD treatment by medical professionals around the country), and why Sublocade is helping so many people reach their self-defined medical and recovery goals.

"We’re an MOUD clinic in Kensington, so we’re working with a population that is pretty consistently living unsheltered and injecting fentanyl,” says Chad Gurdgiel, coordinator of STEP at PPP. “We provide all the different buprenorphine products like oral Suboxone and injectable Sublocade. We also have the capability to do Vivitrol.”

Chad and his colleague Brad Meck, a case manager in STEP, emphasize that the PPP clinic is extremely low barrier. Each participant is paired with a case manager who offers stability and guidance, but there are very few requirements beyond that.

“All we ask is that you show up, you take the medication, you meet with us,” Chad clarifies. Unlike many other clinics, PPP does not turn participants away if they continue to use fentanyl.

Unfortunately, there is still a lot of stigma around MOUD, particularly in traditional recovery settings.

"Some 12-Step groups assume that you’re not technically ‘clean’ if you’re on meds,” says Brad, who has been in recovery from opioid use disorder for 10 years thanks to Suboxone. “I don’t really care about that... buprenorphine saves lives and increases patients’ quality of life by an immeasurable amount.”

The fact of the matter is that buprenorphine is safer than Tylenol, and some people need to be on it forever, and that is totally fine.

Chad agrees. “A lot of what we see is folks coming into our program that internalize a lot of that stigma. Even in the induction phase, they might say that their ultimate goal is to be off everything, that this is only a temporary solution because ultimately ‘sobriety’ is what they must work towards."

Part of what Chad’s team does is try to dispel myths about MOUD and offer participants evidence that using medication is a valid form of recovery.

“The fact of the matter is that buprenorphine is safer than Tylenol, and some people need to be on it forever, and that is totally fine,” Chad emphasizes.

A decade into his recovery, Brad is still on medication and knows that this is the healthiest decision for himself. “I got on, and was free of withdrawal. I'd spent 10 years of my life withdrawing every day. I thought, I never want to feel that again. I’m a normal human being for God’s sake. It's beautiful.”

Another unique challenge faced by PPP participants is that there is a large street demand for buprenorphine in Kensington. According to the STEP team, when a participant leaves the pharmacy, they are immediately greeted by people offering cash for their buprenorphine. This constant temptation is perhaps the biggest challenge to induction, or getting started on buprenorphine.

Induction itself is extremely difficult for most people with OUD.

“Buprenorphine has such a high affinity for the opioid receptors that if you introduce bup while there is still fentanyl on the receptors, it will put you into precipitated withdrawal — so your standard withdrawal symptoms times a hundred,” Chad says.

We’re so much more intentional about induction.

Fentanyl has a short half-life as far as the psychoactive effects are concerned, but it is fat soluble so it stays in the body for much longer than brown powder heroin or oxycodone. If a participant has a fentanyl addiction, it can take 48 to 72 hours of waiting before introducing buprenorphine. And that wait, Brad states, is brutal.

“Movies don’t even get it correctly. [Withdrawal] is horrific.”

Because of severe withdrawal, PPP has adjusted its induction to fit the needs of our demographic. STEP helps patients start buprenorphine with a micro-induction, recognizing that most participants are not going to stop using fentanyl right away.

“We start them really low, sometimes with a half of one milligram during the first days... A lot of what we do is planning around the patient’s induction,” Brad explains.

The team then introduces more and more buprenorphine over the course of a few days, while the participant slowly decreases their fentanyl intake, what Chad refers to as a “gentle transition of titrating up and titrating down.”

"Most other clinics don’t have time or don’t pay attention to induction... We’re so much more intentional about induction. We want to know: What are you going to do when you walk outta here? How much are you taking? Let’s only give you that amount so you’re not walking around the street with the temptation to sell it all,” Chad says.

In addition to STEP’s individualized induction process, Sublocade has been a gamechanger in navigating obstacles to medication adherence.

“There is the diversion risk for Suboxone, but Sublocade, which I freaking love, is injected into your stomach subcutaneously. You get it once every four weeks and then you don’t have to do anything. You don’t have to remember to take it anymore. It’s just inside you and it slowly provides buprenorphine in your blood stream,” Brad explains.

While patients are asked to return for their injection every four weeks, each dose actually lasts at least five weeks, often longer. There is still so much buprenorphine metabolized in their system that there is a buffer between the four-week mark and the onset of withdrawal.

As with any of the other medications, STEP tailors treatment with Sublocade to the individual. According to Chad, it is standard practice to start a patient on a “loading dose” of 300 milligrams and then quickly go down to a maintenance dose of 100 milligrams until the doctor takes the patient off the medication completely.

"We do a 300-milligram loading dose and we’ll do that as long as the patient wants. We will do a higher dose for a longer period of time because we know that our patients are using fentanyl. There are no classical opiates anymore in this community,” Chad explains. “A lot of our folks have really high tolerance and need more buprenorphine for a longer period of time.”

Every month the clinic has between 15 and 20 people receiving Sublocade injections. Chad says that incentivizing participants for their injections is correlated with higher success rates.

“The theory always was, what does somebody make in a month on the street from selling their medication? Can we pay somebody that much to get a Sublocade injection? We're doing it now. We're giving everyone $100 in Visa gift cards every time they get their injection,” he says.

Joey Scalia, a participant at PPP for the past seven years, developed opioid use disorder in 2016. He says that he had been to rehab at least six times before finally connecting with his case manager Brad Meck and beginning Sublocade. Today he is proud to say he has not used fentanyl in eight months.

“When I left rehab before, I would relapse and relapse and relapse,” Joey recalls. He found out about Prevention Point’s MOUD clinic from word-of-mouth on the street. He first tried Suboxone, which did not work out for him, as he had trouble keeping track of the medication and managing a daily dose.

“I got [Sublocade] about seven months ago and it works fine. You don’t have to keep track of it, you know what I mean? You just have to renew the injection monthly with the doctor. I come here every month and get it,” Joey says.

For Joey, the combination of Sublocade along with frequent check-ins with Brad and the doctor have been exactly what he needs to meet his health and recovery goals.

“I come here every day if I’m not working. It’s like a safe haven. I really like this place, really a lot. They’re nice to everybody I’ve known. I actually only come here,” Joey emphasizes.

“Sublocade is like a miracle drug. It doesn’t interfere with eating or sleeping, it doesn’t make you high. I’ve told so many people about it.”